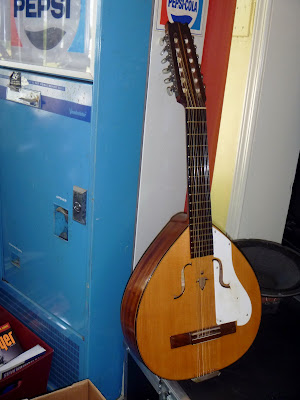 The guy that sold us this piece told us that his family bought it in Spain, but he didn't know what it was called or how it was supposed to be tuned.  A peek in the soundhole at least reveals that it was built in December 1969 by a Mr. Alfonso Checa, a well-regarded classical guitar builder from the town of Baza.  It's not a guitar, though - it's another mystery instrument!

Well, it was.  Somebody sent us an email explaining that this thing was a varation on the Spanish cittern called a "laud."  It's got six double courses, tuned in fourths.  That's what the man said, anyway, and who am I to argue?  When it comes to stringed instruments, it's amazing how many variations there are in the world.  Needless to say, this thing can do a pretty good job of covering all the cittern parts in the band, but what about the mandola?  The oud?  The tres?
Posted by Max at 12:00 PM