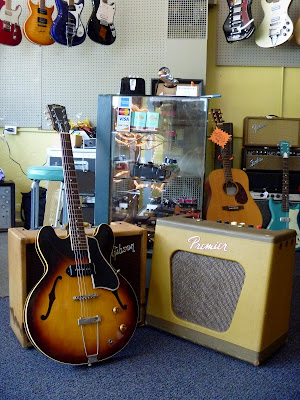 More vintage finds - the guitar is a 1960 Gibson 330T, and the amps are a Gibson GA-18 Explorer and a Premier 120, both from around the same era.  Both amps sport a funky, darker tone that would have been an alternative to the bright, spikey twang of the new-fangled Fender amps of the day.  On-board reverbs were an unknown quantity at the time these amps were built, so a swampy and moody tremolo is the only effect available on either. 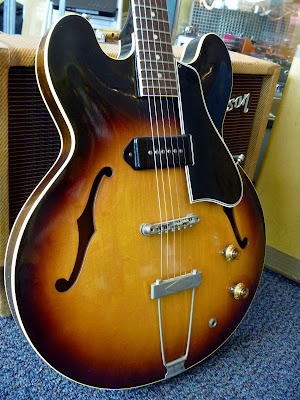 The ES-330T is basically a one-pickup version of the more famous ES-335, and this one has aged beautifully, with a some nicely yellowed binding and some fine, subtle checking on the finish.  The 'burst   Like the similar one-pickup ES-125, this stripped-down model is a great value for a vintage Gibson!  Who needs two pickups, anyway?﻿
Posted by Max at 4:30 PM 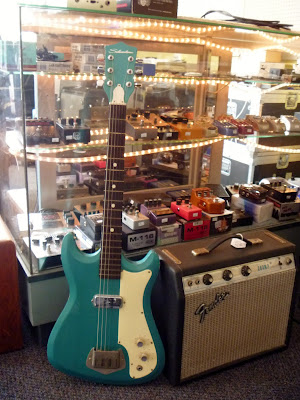 This lovely piece is a Silvertone 1413, a stripped-down single pickup guitar with a sound and look that were surely pitched to appeal to the hordes of clean-cut young Americans in the early 60s who were starting instrumental bands inspired by the thriving surf and hot-rod subcultures.  Interestingly, the date stamp reads March 26, 1964, which means that this guitar was built, shipped and sold while the Beatles were rapidly conquering the world of American pop, drowning the sound of surf in a deluge of "yeah, yeah, yeahs" and shaggy haircuts. 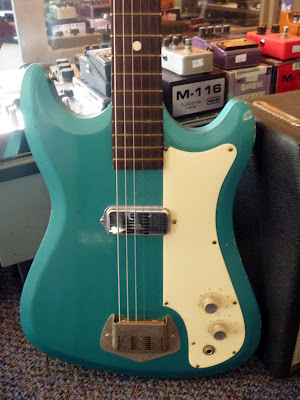 But even though the Kay-built 1413 model was short-lived, it has an enduring appeal, thanks to a unique color (surf teal?) and a great twangy sound.  The neck and action are most definitely not conducive to shredding or fluid bending, but are great for whacking out punchy chords riffs.  Add in a glass slide and you can gracefully glide over the frets to produce sweeter sounds. 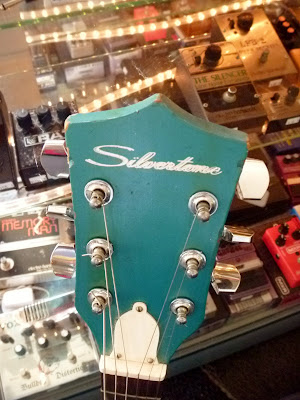 A close look at the headstock reveals a double-stamped logo, a neat little "flaw" that adds to the charm.  The stock tuners have unfortunately been replaced with generic ones, and if we hold this one long enough we'll probably get around to installing old-school tuners with plastic buttons.  Overall, though, it's a gem - this one just jumps up in your hands sometimes!
Posted by Max at 4:10 AM 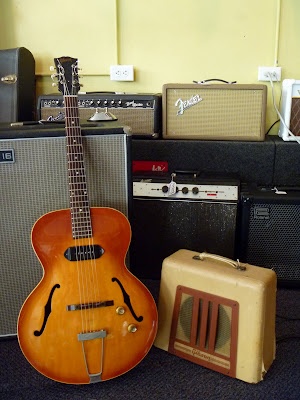 Here's a pair right out of the 1950s - a Gibson ES-125 and a BR-9 amplifier. We've had another ES-125 in the store before, but like we say, you can never have too many guitars from the 50s. Playing through this rig makes me want to play some jazzy jump blues licks, or maybe some western swing.  Much like those bygone musical styles, this guitar and amp have authentic roadhouse appeal, but also a certain sweetness and delicacy that often goes unappreciated. 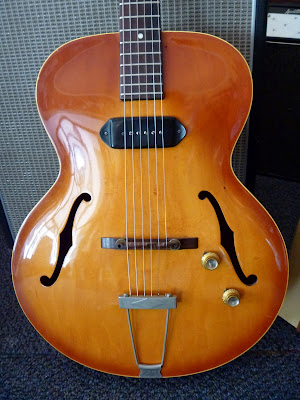 The body has been re-finished somewhere along the line, but it's in an attractive cherry burst, very professionally done.  ﻿That lone pick-up is all original, though.  Sure, it's only one pickup, but if you can only have one pickup, an old Gibson P-90 is a damn good one to be stuck with.  ES-125s have a reputation as the "best deal" in vintage guitars because the basic design and single pick-up layout have kept the prices well below the likes of an ES-335, ES-175, etc. 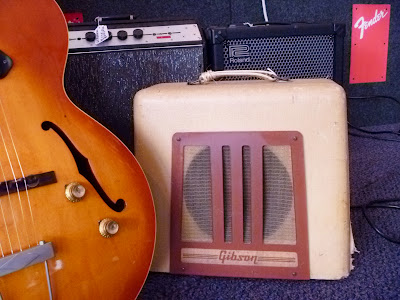 The BR-9 was built between ﻿the late forties and fifties.  It has a single 8-inch speaker and a very distinctive tonal identity: whereas most of our small low-wattage tube combos very quickly break up into snarling distortion, the BR-9 stays clean and crisp even with the single volume knob wide open.  The most you'll get out of this one is a little extra warmth, a little "blurring" around the edges.  Early amps like this were designed with "hi-fidelity" in mind, so conspicuous crunch and grind tones were to be avoided. 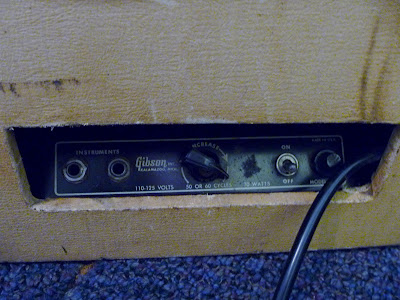 The control panel is about as simple as you can get!  No tweaking necessary.  I also believe these amps were also meant to be played with a lap steel guitar.  This amp would certainly be a boon to any tone connoisseur and/or studio rat.  I can't think of any piece of gear that so effortlessly conjures up the sound of early honky-tonk, Hank Williams, and big Cadillac cars with new whitewall tires.
Posted by Max at 2:21 AM 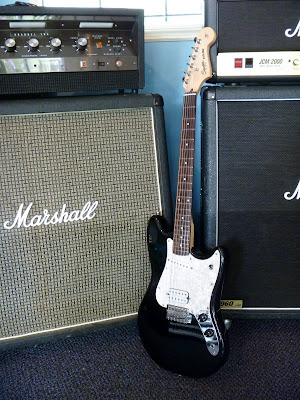 I know, I know...a Squier?  But this Cyclone has a little extra mojo, thanks to the Strat pickup in the neck and a special "I meant to do that" wiring mod that puts the two pickups out-of-phase when you flip to the middle position.  Not to mention that both pickups are quite loud by themselves.  So basically, you get the distinctive Mustang body style and some of the extra tonal quirks while only having to contend with a simple Gibson-esque three-way switch. 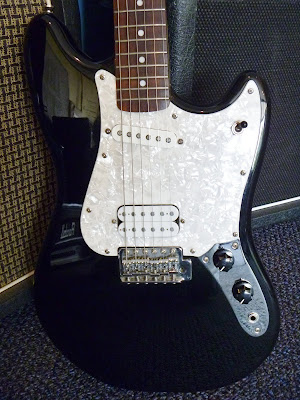 I have to admit, I often feel cramped when trying to play on a short-scale guitars, but with the nice fat frets this one has I seem to fare a good bit better.  Add in a pearloid pickguard and a Strat-style tremolo bridge and this Cyclone gives you a lot of guitar for the money!


Here's the Cyclone being paired with a cool new gizmo we just got in - the Dan Electrode adjustable power supply.  You can use it to "starve" an effects pedal by adjusting the voltage, simulating the effects of a weak battery.  The end result is that you can pull twisted sounds out of your plain-jane distortion pedals that you'd normally associate with fancy boutique setups and modded-out "circuit bent" stuff.  Check it out!
Posted by Max at 6:31 PM

Here's a bonus for fans of the Engelhardt upright - a cool slap bass workout by Josh McCoy, who's selling the bass here on consignment.﻿
Posted by Mike at 6:04 PM