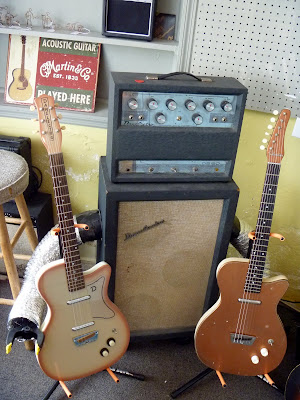 Here's our store mascot Dan E. Lectro with a couple of his best bosom chums - a vintage Silvertone 1415 and a late 90s Danelectro reissue.  Like most Silvertones, though, this guitar was actually built for Sears by another American guitar company, and from the looks of that masonite construction and lipstick pickup, I'd wager it's also Neptune City, New Jersey gal at heart. 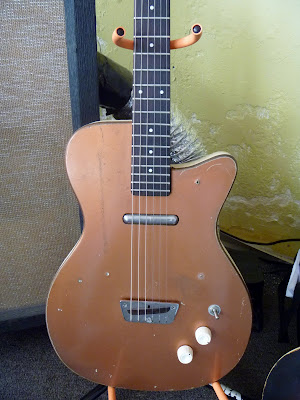 That one pickup really screams, and the wiring has been untouched since the late 50s/early 60s - it still has the original potentiometers and the big fat "tootsie roll" capacitors inside.  Although, unlike some old Danelectro/Silvertone guitars, the paint has actually dried - leaving it thankfully bereft of the infamous curse of the eternally tacky neck that plagues some of these models.﻿ 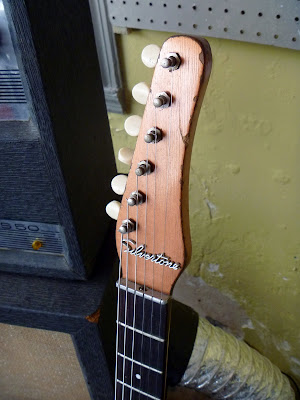 The one has the "dolphin nose" headstock instead of the earlier coke bottle shape, which dates it somewhere around 1959-1962.  These guitars are justifiably famous for their unique, funky tone that lends itself to prickly blues and clangy garage rock.  Come check it out - it's one of Dan's favorites!
Posted by Max at 12:51 PM 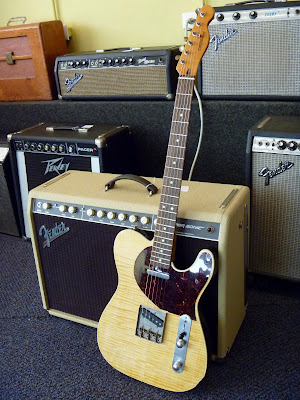 Here's a truly unique one-off piece, a custom Telecaster-style guitar made by DBX Sound, which is basically a guy named Dave Carness working out of San Francisco.  He calls this the "Dark Back," and it's made out of an exotic tropical wood that I couldn't even attempt to pronounce - Pumajillo, with a Maple veneer on top.  The amp I've chosen for a backdrop is a super-sweet Fender Supersonic.  It has a preamp toggle that lets you choose between a Vibrolux or a Bassman circuit, and a second switch that lets you run either setting in a "vintage" or super high gain "burn" mode, covering just about all the tonal options you could want out of a Fender combo. 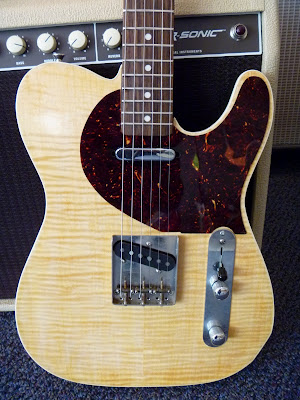 Yes, the top is pretty, but the most amazing thing about this guitar is it's weight, or lack thereof.  It tips the scales at just barely over six pounds - very easy on the old shoulders!  Even the neck feels light as a feather.  The pickups are Alnico Tone Riders, which have a nice vintage Tele sound - no one need know that you're not lugging around a seven-and-a-half-pound-plus monster to get that tone.  There's also something just a little bit...friendlier about that lower horn, as well. 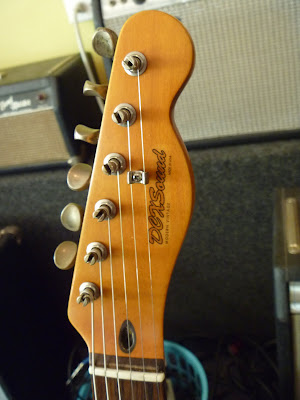 The headstock shape just barely deviates from the standard Tele, and the aged tuners are a nice touch.  Overall this is one of the coolest guitars we have in the shop - and until Mr. Carness makes a few more, you certainly won't find another one anywhere else!
Posted by Max at 4:32 PM 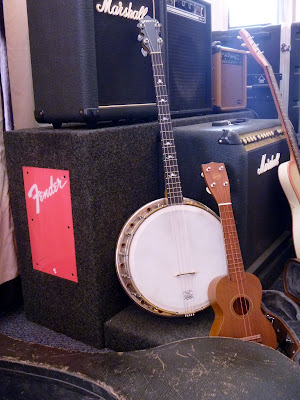 Here's a pair of vintage Gretsches - a tenor banjo and a soprano ukulele.  Hard to date these guys exactly, but they're both very cool pieces that can instantly evoke the music of the early-to-mid-twentieth century.  Picture a little hot jazz band powered by a brisk strum on either of these guys and I'd say you're pretty much on the money. 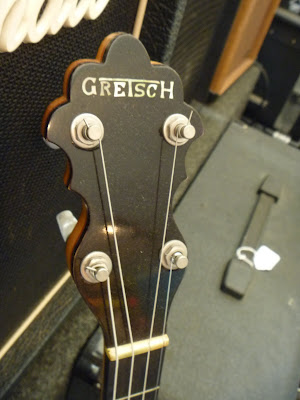 The "T-Roof" logo appeared on Gretsch models starting in the late 40s/early 50s, which casts a pretty wide net on the age of the banjo, so I would hate to take a wild guess and be totally wrong here.  It's showing a reasonable bit of age and tarnish on the metal parts but no obvious signs of being 50+ years old - hardly any checking, in fact.  The uke is a little easier to date, as most of the Gretsch ukes were made in the fifties. 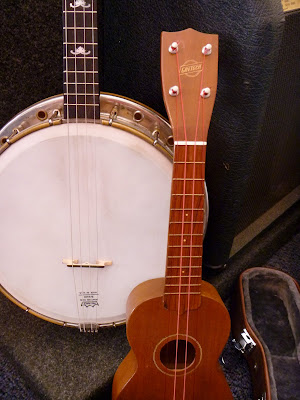 The craze for ukuleles is definately a cyclical thing - hitting in the 1920s, the 1950s, and right now, apparently!  The twee indie pop machine - "iPod rock," if you will - just gobbles these things up nowadays.  In fact, both of these instruments have gained a little more hipster appeal nowadays - this tenor banjo is tuned in fourths like a mandolin, making it perfect for a variety of folk/ethnic styles (Celtic, Gypsy, etcetera) that are also big with the kids these days. 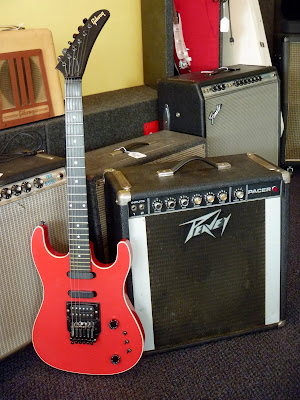 Lately we've been on a 1950's nostalgia trip - a time of poodle skirts and hairdos slicked down with pomade.  Today, just for a change of pace, let's visit the 80's - time of poodle-like hairdos held together with plenty of aquanet.  Back then, the "Superstrat" was the very latest craze, a tricked-out amalgam of traditional Fender-style curves and shred-geek gizmos that upstart companies like Kramer and Charvel made their name on.  Even Gibson got in on the act, as you can see by this 1988 US-1. 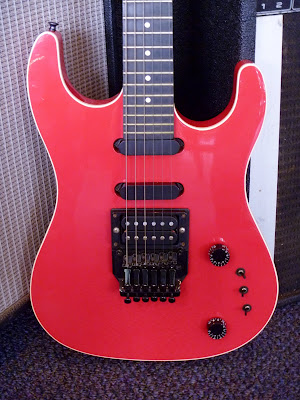 As you can see, this guitar has the single-single-humbucker configuration that defined a "Superstrat," along with the near-ubiquitous Floyd-style tremolo.  The pickups have individual on-off toggles instead of a three-way switch, and the finish and binding straddle the line between the guady neon era and something a little classier.  What you don't see is the "Chromyte" that Gibson used as a lightweight filler in the chambered body.  You and I would know it by a different name - balsa wood!  Odd as it sounds, it actually works pretty well, adding some air to the bright, spiky-sounding pickups. 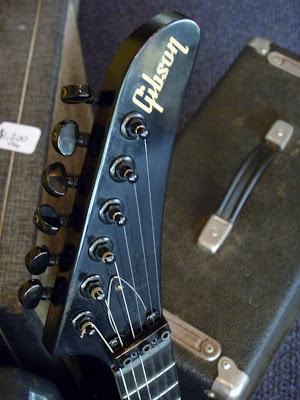 Design-wise, the headstock was obviously borrowed from the Explorer, with the Grover tuners and locking nut checking off the last boxes on the shredder checklist.  Even though Gibson has long since passed through it's midlife crisis and now mainly sticks to the classic designs of old, this axe serves as a neat relic of it's day and a great deal for anyone looking for an American-made Gibson﻿ that you can do dive-bombs on.
Posted by Max at 5:52 PM 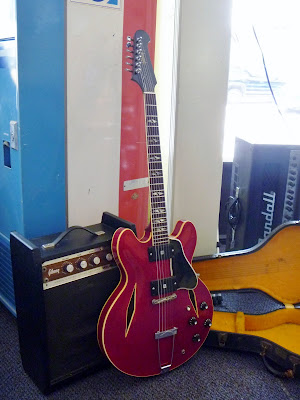 Here's another one that a friend brought in to show off.  Yes, the same guy that had the Supro amp, the lap steel, and the National Belaire.﻿  Some people have all the fun.  This is a Gibson Trini Lopez from the mid-sixties,  a semi-hollowbody with a distinct look that sets it apart from its closest cousin, the ES-335.  Trini Lopez sang mostly pop and strummed with a bright, infectious feel, but the eye-catching diamond soundholes and inlays of his signature guitar have given it a cult following amongst well-off rockers like Dave Grohl and Noel Gallagher. 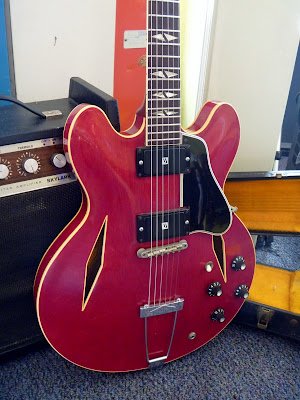 The owner swapped out the original pickups for these high-output coil-tappable beasts sometime in the 80s, though he swears he's got the original pickups squirreled away somewhere.  These pickups have have a good tone, though they do look a little conspicuous next to that yellowed binding and checked, aging finish!  Also - that amp in the back is one of ours; a nice little small-wattage Gibson Skylark with built-in tremolo. 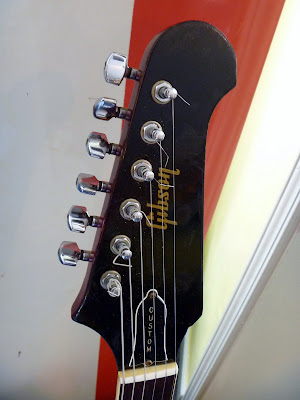 As you can see, the headstock is similar to the ones used on the Firebird models.  I don't know how well you can see from this picture, but a "friend" of the owner's apparently took it upon himself to drill extra holes in the headstock, to change the tuners to a "3x3" arrangement.  The holes have been filled in since then, but yeesh, with friends like these... Still, this is a fantastic old Gibson; a little piece of history that you can still play!
Posted by Max at 2:56 PM