Here's one that took me buy surprise - a woman brought this in for us to restring.  See, someone had pulled all the old strings off at once, causing the floating bridge to fall off.  She told me that it had been her father's, and that it was "nothing fancy..."


Yes, nothing fancy...and then she reaches into a gig bag and pulls this gorgeous vintage archtop.  Wow!  This has got to be one of the coolest archtop guitars I've ever seen!  The finish is quite fetching, being a few shades darker than your usual sunburst - I'd call it a "sweet tea-burst." 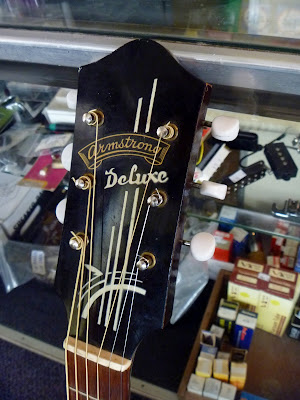 The Art-Deco headstock stencil says "Armstrong Deluxe," but everything else screams "Harmony!"  This would have been one of the nicer guitars they made, likely  from around the late 50s to the early 60s.  Uncle Freddie was kind enough to come over from next door to take a look, and he commented that it looked similar to the "Cremona" series, mostly because it has a spruce top and maple back and sides. 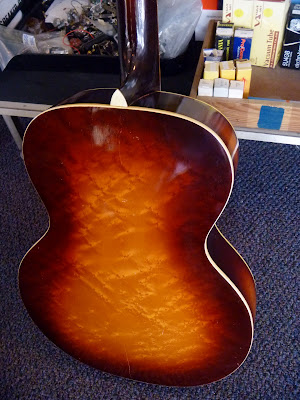 Speaking of the back - yes, it looks like curly maple, to boot!  But looks aren't everything...luckily, with the intonation properly set and a fresh pack of strings, this thing sounds as rich and vibrant as it looks.  The woman said that her son had been learning how to play on this one - man!  Somebody out there has earned my guitar envy....
Posted by Max at 2:24 AM