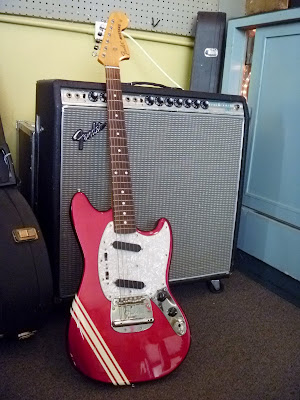 Here's a cool pair.  The guitar is a Japanese-made Competition Red Mustang re-issue, and the amp is a genuine 1968 Super Reverb.  Being a '68 means that though the amp has the look of a silverface, the insides are still the same as an older (and more desirable) blackface model.  I myself play a later Super Reverb from the early 80s, and I firmly believe that if you seek to play rock and/or roll music (as opposed to metal or hard rock), you can do no better than one of these babies.  The ten-inch speakers sound vicious when they break up, and the shattered glass roar you can unload still leaves plenty of room for the dynamics of the rhythm section. 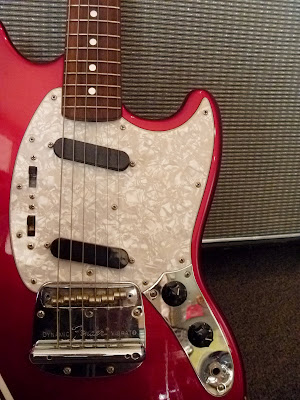 We've had older Mustangs in before, but this one being a reissue puts it in a more affordable price range - ironically the reason why old vintage Mustangs and the like became so popular (and gradually less affordable) back in the 80s and 90s.  Of course, there are more virtues to the "student" offset models - the short scale and comfy slim neck are a boon if you've got smaller hands.  And of course, racing stripes rule. 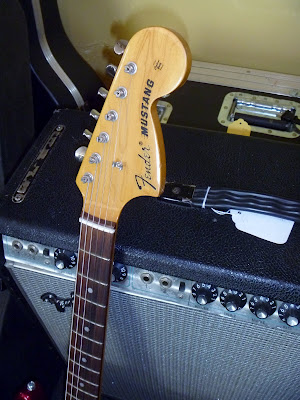 We often take it for granted, but the amazing thing about Fender is the wide range of players that their products appeal to - from the snooty types whose noses fly up if it isn't covered in tweed and/or nitrocellulose, to the punk rockers scraping up enough to buy some scrappy Japanese Squier.  Of course, here at the shop we try our best to do the same!
Posted by Max at 3:08 AM