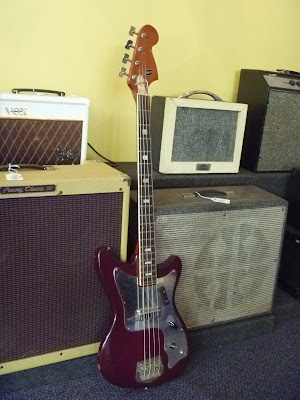 This one came to us courtesy of a customer who found it while cleaning out the back room of an old church.  When we first plugged it in, we were greeted only by the sound of the input jack howling in protest.  But one fresh jack and tone cap later, and this thing was ready to kick out the jams. 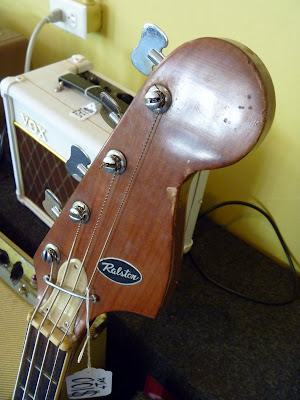 The headstock says "Ralston," but the back neck plate says "Japan," and that tells you a bit more - cosmetically and tone-wise it fits right alongside most 70s-era stuff that Teisco, Kawaii, etc, pumped out.  This is no short-scale featherweight, however - it has a long-scale neck about as fat as Louisville slugger, which surely contributes to the meaty tone of that one single coil pickup.﻿ 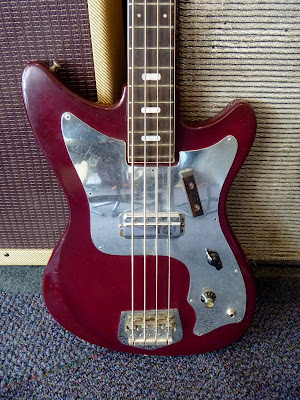 I love the overall look, with the not-quite-a-jazz-bass body and a nice roughed-up finish.  The grubby metal pickguard is a nice touch, and helps shield the electronics, to boot.  Even though this bass was found in a church somewhere, I have a hard time imagining it being played for gospel music - it justs seems too wonderfully hip and grimy to not be a disciple of rock-and-roll.  I dunno, maybe somebody got saved and had to leave it at the door - "Gee, I think Bob will be a lot less likely to stray if we can keep this durn thing away from him!"
﻿
Posted by Max at 1:29 PM