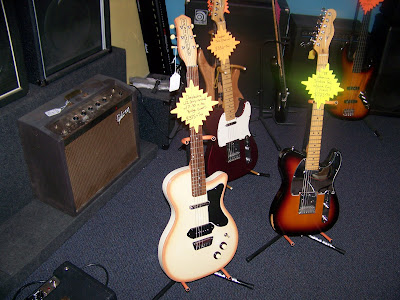 Here's a good shot of a couple of different pieces we have. That's a 90s-era Danelectro U2 re-issue up front, and yes, that's a P-90 in the bridge position. This is another guitar we have on consignment from my friend Mike McMillan, and it's also one of my favorites. The P-90 sounds about as greasy as you'd expect sitting on top of that glorious, glorious Masonite, and the fact that it's wired out-of-phase with the lipstick pickup just adds to the freak factor. Like most Danos, this guitar is a nasty, nasty choice for blues, but the mods really push it to a new level. If a battered old Cadillac hearse ever pulls up in front of your house with Tom Waits at the wheel, THIS is the guitar you want to grab when he rolls down the window and yells, "let's jam!"

Everyone will envy you as you both drive off into the sunset, laughing manically.

Behind that, we've got two Telecasters - the Tele with the dark wine finish is a totally solid "mexi-caster," and the one with the burst is an American standard with EMG active pickups. It's a cool guitar, but my boss says we need to swap that mirrored pick guard for tortoiseshell... 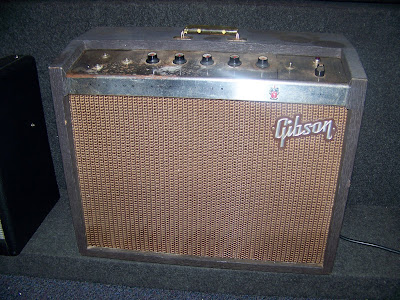 This is the Gibson amp that you can see off to the left in the first photo. It's a "Falcon" combo from 1964, and even though we acquired it with the reverb tank missing in action, it still sounds fantastic. These old Gibson tube-amps have vibe to spare, but they can still be had for a song when compared to the Fender amps of the same era.

Hopefully we can take some videos sometime so everybody can actually hear this stuff. Maybe next time...
Posted by Max at 11:22 PM 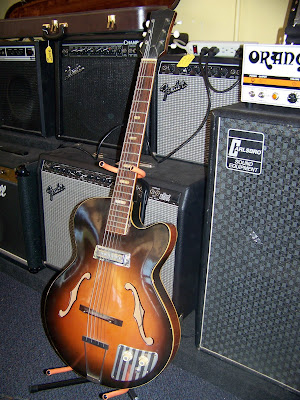 Here's a mystery guitar that we can't quite identify. It has the word "Japan" pressed into the back of the neck, and that distinctive striped plate under the knobs and input jack practically screams late-60s Teisco, but so far I've been unable to pinpoint the exact model. In fact, I've haven't been seeing any single cutaway semi-hollow guitars made by Teisco, so I may be way off the trail. But when the trail includes digging through Japanese guitar sites with names like Rolling 60's Bizarre Guitars Garage, I think the journey alone is well worth it. 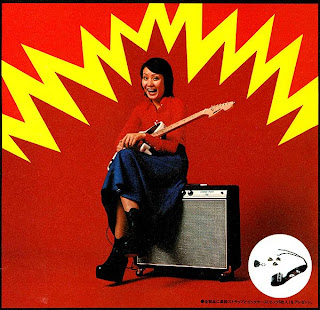 Well worth it, indeed

If anybody can help us out, just leave a comment or send me a message. And of course, even if we never figure out where this one came from, it could still use a good home... 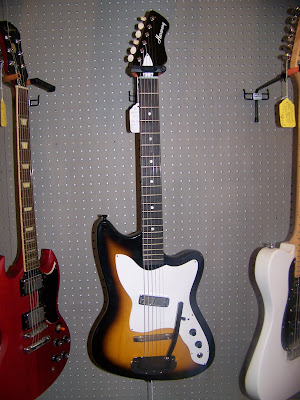 Here's another cool one. It's a Harmony Bobkat H14 from the 60s. Note the sweet and highly desirable DeArmond "gold foil" pickup, which cranks out a surprisingly thick sound for such an unassuming little guitar. It also has a switch to bypass the tone and volume knobs, because apparently the pickup looked lonely all by itself in the middle of the guitar. This is one of a few pieces we have on consignment from my friend Mike McMillan, who owns the Sunshine Cycle Shop here in Greenville. Mike says he had to do a little re-wiring when he got it, but now it's in fantastic condition, especially for a guitar that would have been considered a "budget" model back in the 60s. This thing plays great and sounds amazing, and is waiting patiently for the chance to be the secret weapon in somebody's guitar arsenal (or "guitar-senal," if you prefer). Stop by and check this one out!
Posted by Max at 8:33 PM

Hello from Wood and Wire

My name is Max and I work at Wood and Wire Guitar Shop here in Greenville, South Carolina. Since I'm surrounded by a bunch of used, vintage, and sometimes downright bizarre gear all day, I figured I'd snip a few pictures and share with everybody. So first up... 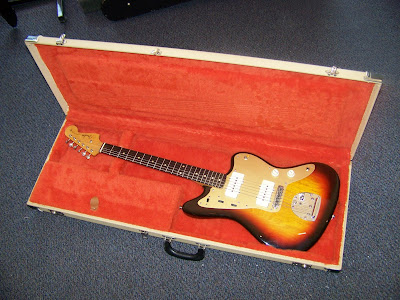 Homina, homina, homina...
This, believe it or not, is a 1959 Fender Jazzmaster. The pristine appearance is due to the body having been refinished and the metal pickguard having been re-anodized. My boss, Mike Goe, scored this all the way from California, where it was used by a guy in a regional surf band. The refinishing knocks off a bit of collector value, so you kinda have to wonder just what this guitar must have looked like before. Still, just a millimeter or so below that finish lies exactly what rolled out of the Fender factory about 51 years ago.

The Jazzmaster is justly famous as the guitar that flopped completely with the jazz players of it's era, only to emerge as a "sleeper hit" when guys like Tom Verlaine, Elvis Costello, Thurston Moore, and J. Mascis plucked them out of pawnshops and, you know, made music history with them. The un-jazziness of the Jazzmaster is so ingrained into guitar lore that a girl came in today and asked if we had any "jazz guitars," and of course neither me or Mike mentioned this at all.

Ah, but there is at least one actual jazz player that took up the Jazzmaster: 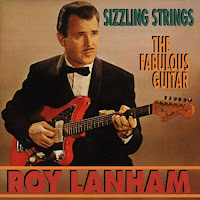 Okay, so Roy Lanham also played plenty of country as part of the Sons of the Pioneers, but he also peppered his albums with nimble swing lines and lush chord melody playing. His awesome hepcat/exotica recording of "Brazil" consists only of bongos, a little acoustic guitar in the background, and about a hundred or so knuckle-busting chords being pumped out of Roy's Jazzmaster with laughable ease. Highly recommended.
Posted by Max at 8:27 PM