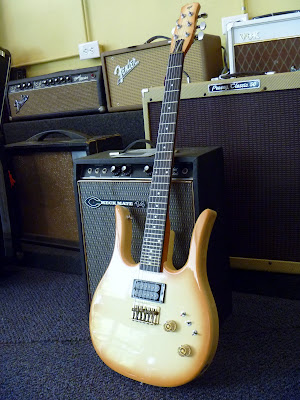 We just got these pieces in the other day.  The guitar is a Japanese-made Danelectro copy that's technically called a "guitarlin," a crazy 31-fretted beast that lets you soar up into the stratosphere and pick in the range of a mandolin.  At least, that's the idea.  This one was made back in the late 70s/early 80s by a company named Hondo, and as far as I know this was the very first in a long line of guitars built around the reviving the old Danelectro/Silvertone mystique. 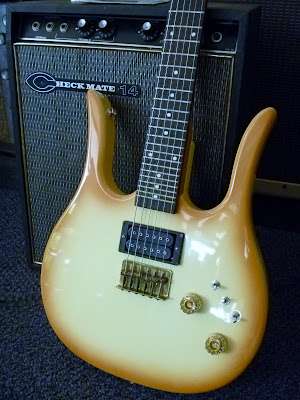 The Hondo II Guitarlin upgrades the masonite-constructed body of the original with one made from solid mahogany, and the single humbucking pickup is active-electronics-boosted, coil-tappable, and phase-flippable.  It's about as far from lipstick tubes as you can get!  The amp in the picture is a Checkmate 14, another retro Japanese-made piece.  I think Teisco built these back in the 60s and 70s.  This is one of the solid state models, built it does have a nice queasy tremolo built in.  We found the original manual and schematic in the back - neat!
Posted by Max at 3:43 PM