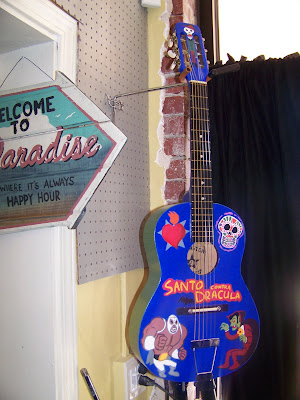 This is actually an old Kay Starter guitar that a friend of mine had. It would never, ever stay in tune, so he gave it to me to turn into wall art. I've done goofy paint jobs on a couple of cheap, banger instruments - in fact, I also did a mandolin for my friend featuring, per his request, a zombie hillbilly string band. I'll have to dig up pictures of that sometime. 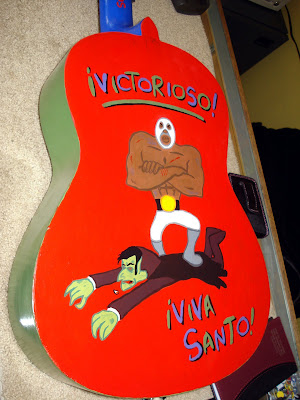 Santo is the most famous of all Mexican Luchadores. Not just a professional wrestler, El Santo spun off his fame into a movie career, taking on all manner of grisly pulp monsters and fiends. One of those movies, Santo contra las Mujeres Vampiro, made it on Mystery Science Theater 3000, which is probably where I first saw this stuff. 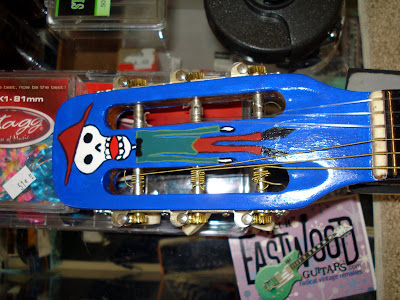 Also, you just have to love the motifs in Mexican folk art. Granted, there are already plenty of skull-adorned electric guitars, but most of them are of the angsty, sinister variety. I just love that all the Mexican Day of Dead stuff is full of happy skulls covered in gaudy colors. Hey, these guys don't let a little thing like being skeletons get them down! Strike up the band! Sing another ranchera! Order another round of Tecate! Viva Santo! 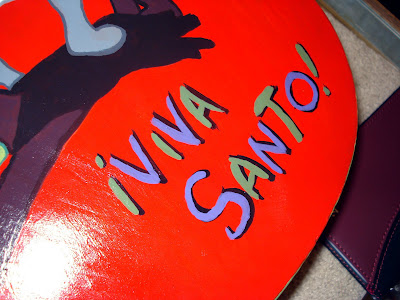 SoI didn't know if this thing would ever sell at the store, but it's a moot point because as of today I've donated it to a benefit auction for Ray Evans, who's fighting a battle with cancer.  Ray has worked at a lot of the music venues around town over the years, so he's got a lot of friends here in the Greenville music scene, who are going to be putting on a benefit show this Saturday at Gottrocks.  So come out, bid on this guitar, and rock out for a good cause.
Posted by Max at 12:00 PM