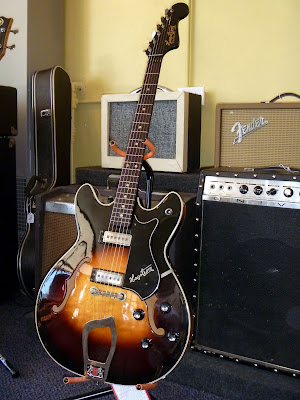 Found another old one.  This is a Hagstrom Viking from the late 60s,  a Swedish-made semi-hollowbody guitar from a company that was one of the first electric guitar builders in Europe.  In the late 60s Hagstrom had their profile in the United States raised with considerable thanks to two things.  First, the company had the endorsement of the great Frank Zappa, who appeared in a series of print and radio ads for many Hagstrom models.  Second, the King Hisself was featured strumming on a borrowed Hag in his famous '68 Comeback Special. 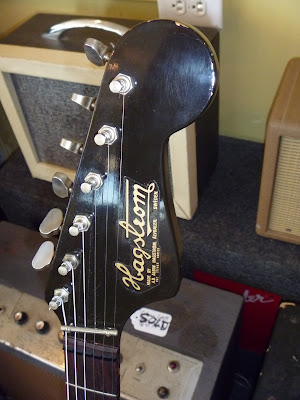 But what about this particular model?  Well, the headstock logo has held on through the years (the only other Hagstroms I've seen in person have had them flaking off), though most of the finish has worn off the back of neck.  That seems to be a common problem with Vikings, though with a neck this slim and fast its easy to see how they can become "well-played." 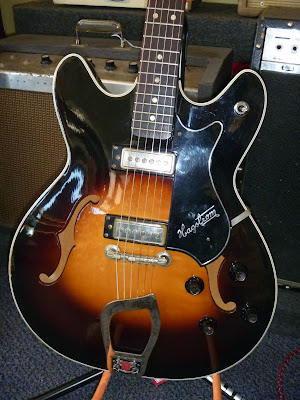 The pickups are single-coils, unlike the later humbucker-equipped models that were even more shamelessly copping an ES-335 vibe.  These single coils still sound very dark and jazzy, though.  A very cool guitar with a positively regal style and sound.
Posted by Max at 3:47 AM