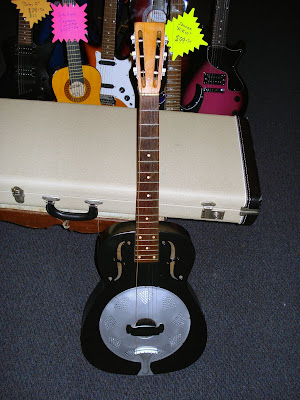 Here's another one we're trying to research. It's an old resonator guitar - and that's all we know. Just how old and what brand are a mystery - can't really even say when the metal body got painted black. If we can figure out what its worth the owner wants to see about putting it in the shop on consignment. It is worth mentioning that this one seems to be set up for regular, Spanish-style playing and not just lap slide stuff. Also, whoever tried playing it last strung it up with nylons! 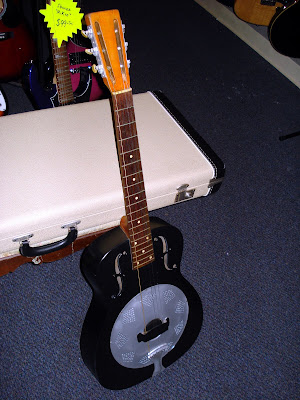 There's no name on the headstock, just a serial number on the very top - 896. Or, um, 968. Gee, does anybody out there have any special tricks for dating and identifying old resonator guitars? We were thinking of dis-assembling the cone and looking under the pan, but any advice is welcome. We're going to have to spruce this one up a bit (fresh strings, set-up, etc.) before it goes on consignment, anyway. 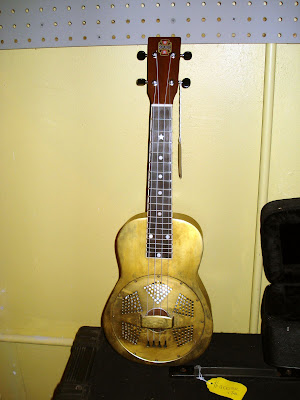 Speaking of resonators, here's a Republic concert ukulele with a metal body and resonator cone. Very, very loud for the size, but the nylon strings keep it from being shrill despite the relatively high tuning. Come to think of it, maybe that's why somebody put nylons on that guitar. In any case, given that resonator guitars usually make me think of Son House, and ukuleles usually make me think of Tiny Tim, my brain just doesn't really know how to fully process this thing yet. A strange beast indeed. 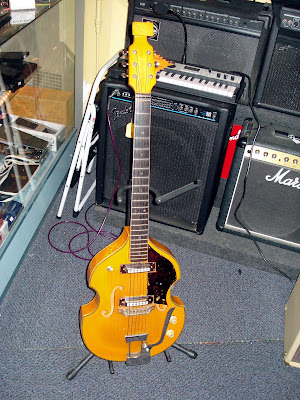 The same guy that brought in the resonator guitar also had this odd bird to show off. A Japanese-made Firstman "violin" guitar from the sixties. This things has character! 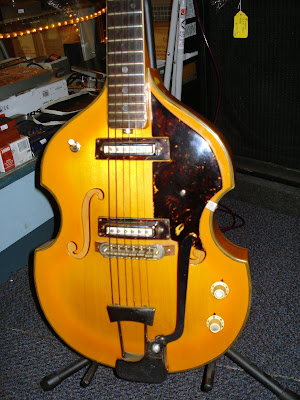 The pickups have a great weedy twang, and the vibrato begs to be abused, Takeshi Terauchi-style. The lack of nutty switches and superfluous knobs is countered by the just-complicated-enough-to-be-useful bridge, as well as a liberal application of tortoiseshell. 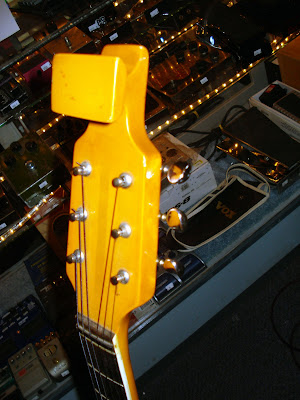 The freaky "hammerhead" headstock is a nice touch, also.

Be sure to check back next week, we'll (hopefully) have some really cool news to share...
Posted by Max at 8:29 PM