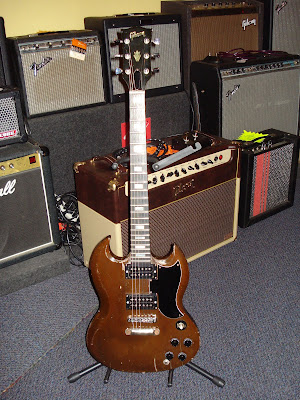 Here's another gem. This 1970 Gibson SG is wonderfully grimy looking, with a walnut finish that's chipped and cracked all to hell. If this guitar had a voice, it would sound like Clint Eastwood after chewing nails and smoking unfiltered Marlboro's. 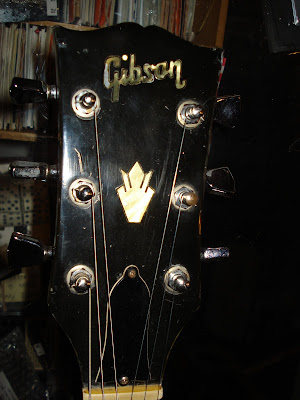 Yes, every one of those battle scars was earned, dagnab it. Here at Wood & Wire, we like the scuffed up stuff as much as the crisp, slick looking stuff - maybe moreso. After all, when a guitar looks "well-played" like this, there's usually a good reason. 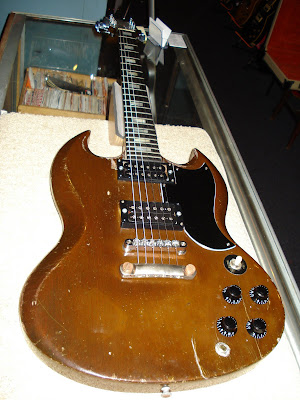 This guitar is no exception. It plays super-smooth and sounds as tough and gristly as only a prime SG can... And yes, with this much wear and parts swapping, this guitar will never end up behind a collectors glass - thank god! Something about SGs (and I happen to own one) just makes you want to bash out chords and play the living hell out of it - I think it's the horns. Also, you can bend the ever loving bejeezus out the neck- or make it sound like you are - if you're brave enough to practice it. I read that Bill Frisell, who uses subtle neck bending as an integral part of his sound, got into the habit when he was younger and playing an SG. Also, one of the best live shows I ever saw was the Hard-Ons (punk band from Australia); if you weren't there to see the guitar player do the neck trick you would've sworn he had a bigsby. Now, if you come and play this one in the store, don't get too frisky with the neck-bending - you might freak my boss out. But if you were to take it home with you...well, whatever happens between a man and his guitar in his own house is his own business. 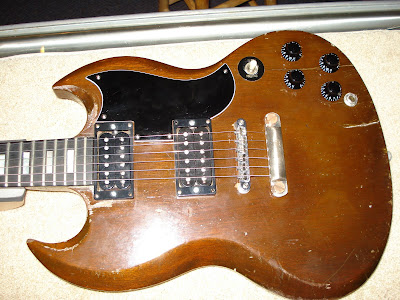