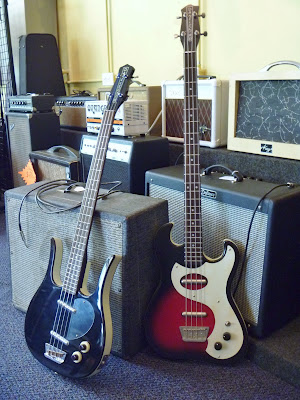 Here we have a dynamic duo of reissued Danelectro basses.  The black Longhorn is one of the earlier Korean-made reissues from the late 90s/early 2000s, and the other bass is one the Silvertone amp-in-case-inspired '63 models that Danelectro started putting out a few years ago.  Now, these are not every bassists' cup of tea, to be sure.  The lipstick tube pickups are about as far from active electronics as you can get!  But if you can appreciate what they have to offer, they do have a unique twangy sound that works great for surf rock and roots music. 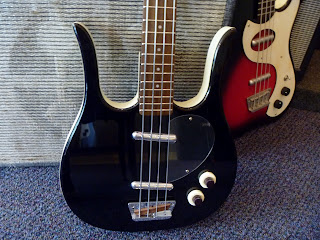 The Longhorn, in particular, is a very cool bass.  The original Danelectro bass was one of the first electric basses on the market (after Fender), available in 4-string and 6-string models.  Back in the 50s they became part of the Nashville sound as the "tic-tac bass" - producing a bright, clicky tone that doubled and added more attack to the sound of an acoustic upright.   Nowadays, a good modern amp can give you a lot more thump from these basses, and the longhorn has become a "period correct" choice for retro roots players who don't play (or don't want to lug around) an upright.  The '63 is a "shoulda been," I think.  I don't think there ever was a bass version of the double-horn amp-in-case guitars back in the 60s, but I've been wrong before.  Unlike the Longhorn, the '63 is a full-scale bass, but it still has plenty of the unique Dano charm.
Posted by Mike at 2:58 AM