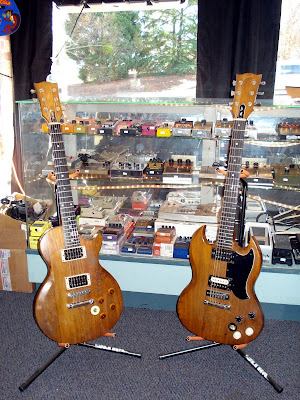 Here's a cool pair - matching 1979 Gibsons! The "SG" and "The Paul" were released as a kind of workhorse or budget model during the late 70s/early 80s. Gee, I wish they still made "budget" guitars today with T-Top pickups in them... 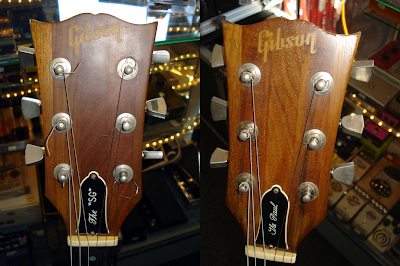 The Wikipedia entry on "The Paul" hilariously describes the finish (or lack thereof) as a "Coffee Table Burst." One of our customers told me it was "just ugly enough to be beautiful." Truly, these woody, walnut-constructed beasts go great with the grubby, beard-sprouting aesthetic that so many rock/metal dudes seem to dig these days. 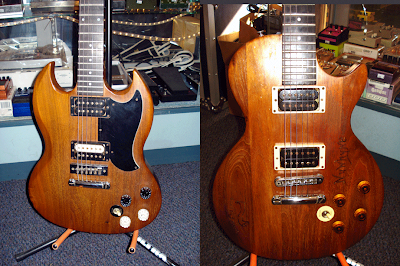 Hmmm....I wouldn't know exactly, but I think the SG has a T-Top in the neck position and something called a "Velvet Brick" in the bridge. Also, the pickup switches on both seem to have gotten lonely, and have decided to huddle up with the volume and tone knobs. The SG is in great shape, and the Paul...well, somebody decided to burn something goofy into the finish. Still, the guitar is solid as a rock and, like the SG, priced well below similar old Gibsons. These are both cool guitars with a growing "cult" following, but they're still within the reach of players (not just collectors). Who knows, one of these might be your best bet for getting some vintage Gibsons in your arsenal without busting your budget too much.
Posted by Max at 8:34 PM