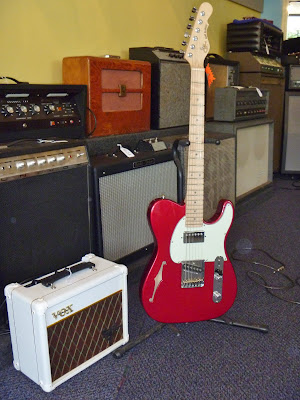 Here's a very nice G&L thinline tele, with a humbucker in the neck position and a gorgeous red finish.  There's just a tiny bit of metal flake in the finish; just enough to give it a nice vibrant "sheen" underneath all those fancy stagelights.  There's plenty of flash sonically, too, with both the humbucker and the semi-hollow construction warming up the inherently spiky twang of a tele.  I'll admit to having no great fondness for most thinline teles, but this one plays great!  I have to say that I've liked the larger frets that have been on the G&Ls that I've played so much that it definitely influenced my decision to have my Fender Telecaster re-fretted with similar fretwire. 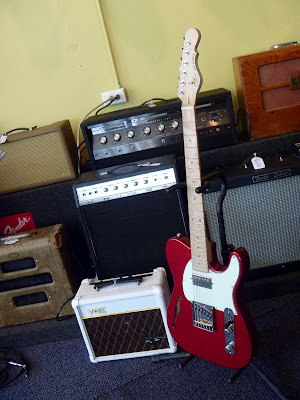 The little Vox amp next to it is a Brian May Special, a little solid state monster that snarls and spits out lots of sharp, nasty, and distinctly musical distortion.  It's based on a homebrew amp that Queen's bass player, John Deacon, cooked up for guitarist Brian May.  May used it to add some hair and gristle to his tracks upon tracks of pristine Vox AC30 tones. Most people wouldn't think that those regal-sounding harmonized guitar lines in Killer Queen and Bohemian Rhapsody were recorded with assistance from such a ornery and rude-sounding amp, but it really does the trick.  It also works as a powerful boost pedal when plugged in front of another amp.  Not bad for what's basically an oddball studio/practice amp!
Posted by Max at 5:43 PM